Seriously, that's what it's like under Trump, isn't it?    No one really has any idea where any American policy is going to end up, because Trump is genuinely a blank intellectual slate with wildly conflicting, politically amateur, advisers surrounding him and vying for policy supremacy.

Hence with his Middle East tour, surely Bannon can't be entirely happy with the way Trump appears to be trying (hypocritically, of course) to tone down the "clash of civilisations" rhetoric that he was happy to exploit at rallies in middle America?   Yet who did write the speech?  Who has sway over him at the moment?    Why didn't it make the obvious point, and tell the Arab nations that if they want moderation of extremism, they have to stop governmental extremism of their own - holding out the threat and practice executing their own citizens for blasphemy and apostasy.?

Yet the only thing certain is the high functioning idiot commentators of the American Right wingnut arena will defend Trump no matter how many times he rewrites his rhetoric or changes his policies.  And just wait for Scott Adams' take on it - it'll be hilariously self serving and disingenuous.  (I am also somewhat amused at the Nissim Taleb tweets on this - apparently, it's all good because the Saudis will spend so much money on American arms it will bankrupt them - and that "the main accomplishment of @realDonaldTrump's trip is to rally his detractors against Saudi Barbaria."   Oh please - as Nichols says on his twitter feed says 'Oh, I'm aware of Taleb's imitation of Homer Simpson saying "everyone is stupid but me"'

Meanwhile, Ross Douthat has a pretty well argued column up in which he attacks the ridiculous "dark state" meme that is the wingnutty explanation as to why Trump is getting so much grief from the media.  Here's how he finishes:

So he’s not being dogged by leaks and accusations because he’s trying to turn the Republican Party into a “worker’s party” (he isn’t), or because he’s throwing the money-changers out of the republic’s temples (don’t make me laugh), or because he’s taking steps to reduce America’s role as policeman of the world (none are evident).

No, he’s at war with the institutions that surround him because he behaves consistently erratically and inappropriately and dangerously, and perhaps criminally as well.

Or perhaps not: All of this may still not rise to the level of impeachable offenses. But the conservatives rising to his defense need to recognize that there is no elite “counterrevolution” here for them to resist, because there is no Trump revolution in the first place.

You don’t want to sell him out to the establishment; I get it. But open your eyes: He’s already been doing that to you.


Update:   Take a look at Peter Beinart's comparison of Trump's speech with Obama's Egypt speech in The Atlantic  - he makes a convincing case that it was Obama who told "hard truths" to the Muslim world, and Trump who went all "politically correct".  But again, in the inverted reality of TrumpWorld, it will be read as the exact opposite.   Look at this conspiracy obsessed  twit at Catallaxy this morning, for example: 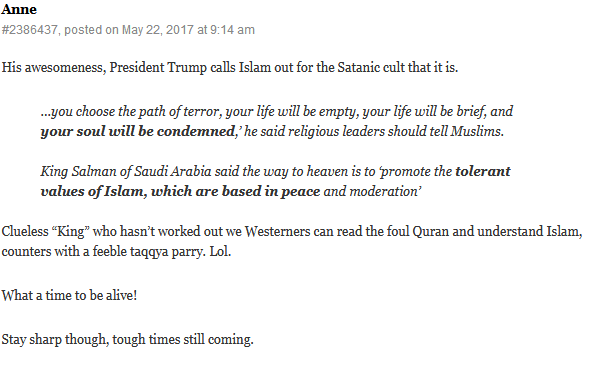 She's a nut, but that's an advantage when supporting Trump.

Meanwhile, I like the blunt way Beinart ends his piece:


None of this should be a surprise. Trump is a coward. He says wildly offensive things when the objects of his derision aren’t around, but crumples when he actually meets them. In his presidential announcement speech, Trump called Mexican immigrants “rapists.” But when he sat down with his Hispanic Advisory Council, he proved “humble” and “conciliatory” and called mass deportations “neither possible nor humane.” During the campaign, he endlessly trashed Mexico’s government. But when he actually arrived in Mexico City last August, he declared the trip a “great, great, honor” and when President Enrique Peña Nieto asked him about his famous pledge to make Mexico pay for a wall between the two countries, Trump refused to discuss the subject. During the campaign, Trump accused Black Lives Matter of being responsible for the murder of police, and described African American living conditions as hellish. But when he actually showed up at a black church in Detroit last September, he spent most of his time flattering his hosts. Trump’s speech, noted The Washington Post, constituted a “jarring shift in tone and message.” During the campaign, Trump repeatedly claimed that China was manipulating its currency. But after meeting with China’s president, he acknowledged that was not true.

The Saudis appear thrilled that Trump was so conciliatory on his visit. They should enjoy themselves while they can. Americans have learned this about Trump: What he says to your face often bears no relationship to what he says behind your back.

And one other thing:

I did think it worth noting one of the comments to Douthat's piece.  Douthat had written:


But they aren’t getting anything but symbolism on religious liberty, because Trump doesn’t want to pick a fight with the elite consensus on gay and transgender rights. 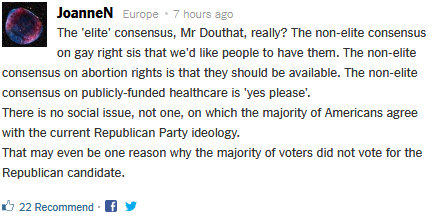 stupid is as stupid does!

you failed to mention Trump criticised Obama's wife for not covering her head but what did his wife do??

Yes, I thought of mentioning that somewhere, but forgot.

That belt buckle Mrs T wore was one for the ages too...

Where does wahabbism come from?