ABC broadcaster Maxine McKew won't be with the ABC much longer. I've always liked her as an interviewer and current affairs host. Despite the fact that she's been living with (now married to, apparently) senior Labor figure Bob Hogg, she has always seemed to me to be a more balanced interviewer than Kerry O'Brien or Tony Jones. 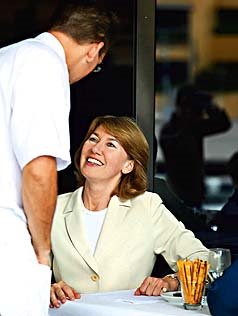 The SMH profile of her from which that photo is taken was very interesting. In fact, I was only telling someone last week how this snippet from that story had stuck in my mind:

During the hungry years of her early career, McKew's private life was not good "There were a lot of Heathcliffs. A lot of 'bad, mad and dangerous to know'.' Hogg was a revelation. He was "a lovely grown-up".

"I had never met a man who had milk in the fridge that hadn't passed the use-by date, or a clean bathroom or fresh flowers on the mantelpiece. It was the way he looked after himself. It was grown-up."

I remembered this because I found it hard to imagine her going out with "bad men". (It also makes Bob Hogg sound like a big girl, which is kind of funny too.)

I hope I remember to watch her last Lateline, whenever that may be.
Posted by Steve at 11:01 pm