In an attempt to cheer me up: rat tickling, revisited 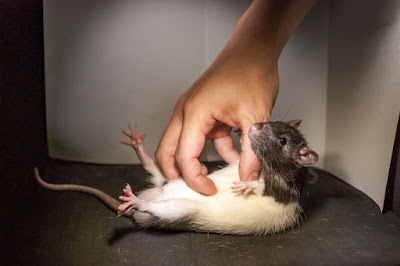 What fun to be a rat-tickle researcher, hey?  As reported at NPR:


That's a part of the brain that processes touch, and when Ishiyama tickled the rats, it caused neurons in that region to fire. The rats also seemed to giggle hysterically, emitting rapid-fire, ultrasonic squeaks. Earlier research has shown rats naturally emit those squeaks during frisky social interaction, such as when they are playing with other rats.

Next, Ishiyama pretend-tickled the rats by moving his hand around the cage in a playful manner. Rather than withdraw, the rats sought more contact. Again, he saw the neurons in the somatosensory cortex firing, even though the rats weren't being touched. This suggested to him that anticipation of tickling could trigger the region of the brain that responds to touch — even without the physical stimulus.

Finally, Ishiyama stimulated the somatosensory cortex directly, by sending an electrical signal directly into the brain. The rats squeaked the same way, suggesting that this region really is the tickling epicenter of a rat's brain.

Actually, given that the research involved electrodes being stuck in their brains, I'm not sure if I should feel sorry for the rats.  Now I'm feeling depressed again...
Posted by Steve at 9:20 am